Analysis of the Process of Writing the Poem, “The Story of Bigger T.” 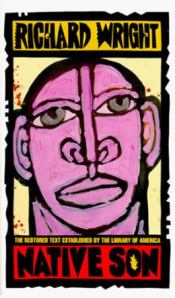 Bigger Thomas is a character in the book, Native Son written byRichard Wright, one of the great lights of the Harlem RenaissanceIn this essay I try to take the reader through the process of  how I write a poem, or at least how I wrote this one.

I would like to say that I began this project by re-reading Richard Wright’s Native Son, but of course I had already sold it back to the bookstore. I had planned to go to the library and check out a copy, but before I had an opportunity to do so my poem was finished.

The salient points of the novel seemed to be the tenement scene in which the Thomas family kills the rat, Bigger’s job interview with Mr. Dalton, the murders of Mary and Bessie, and the trial. I did not make a conscious effort to address all of these sections, my intention being to write a relatively brief poem and not an epic one.

I decided to use the words Bigger T.” rather than “Bigger Thomas” in the title because I felt that it sounded more contemporary and aggressive. I had considered writing the poem in the modern “rap” style so popular today but I did not feel comfortable, as a middle aged white man, to treat this subject in so cavalier a manner. The first line, somewhat of a cliché, “This is the story of Bigger T” came immediately to mind, and being lazy, I kept it. I replaced the words “This is” to “Hear now” because I felt the line would then be declaimed more explosively as it had changed from a statement to a command. The next three lines came to me rapidly. To this was added a fifth line “A common tale and not pretty” between the first and second line. It was a nice line and I did not want to waste it. I now had five lines of approximately four metric feet in length, each line rhyming with all the other lines in the stanza. The basic form of this poem , a ballad, was thereby determined.
I still feel uncomfortable writing poetry that does not rhyme. Perhaps I do not have enough confidence in my own sentimentalities to impose them upon others in a manner less clever. As I say in my poem “The Sonnet Form”

Don’t you agree that it’s a noble trait?
To so constrain yourself when desperately
you seek to share the pure philosophy
within your heart to which all men relate?

I agree with the old idea that rhyming poetry created within the bounds of a specific metric scheme, has a powerful, magical quality, perhaps revealing the imprimatur of the muse. Magical spells are supposed to rhyme after all. When I have finished a lyric or a sonnet that is exceptionally well written (in my own opinion), I feel almost as if I might have had supernatural assistance in the writing of it.
I wrote another stanza and then laid the poem aside until the next day. I then wrote a stanza in the voice of Bigger Thomas. Having known many men in prison of all races who have lived to regret their deeds, and having personally been the author of many tragically stupid circumstances, I believe that I have some idea of what Bigger might have thought and felt. After this, it seemed that the poem would need another two stanzas to satisfy my esthetic requirements, with at least one of them in Bigger’s voice in order to satisfy the requirements of the assignment. Because of this, I switched stanzas two and three to provide a balance whereby the narrator would speak, then Bigger, then the narrator, and so on.

As I work, I will read a poem aloud hoping that it will delight me. I will change words, grammar, add and remove contractions, etc., until I achieve the rhythm and meaning I desire. For example, line three originally read “Native son of the white city” and then it was changed to “Colored son” and then back again, and finally the words “white city” were changed to “windy city”. When I changed it back, I also changed the words “white girl” in line eleven to “young girl”. I did this because I wanted to discount the racial implications of the story. Lines eight, ten, eighteen, and nineteen were rewritten several times. I do not keep previous drafts, believing that if a phrase or an idea is good it will remain or resurface.

As to the last stanza, it practically wrote itself. I had not consciously taken the time to pass judgment upon Bigger Thomas, but it is apparent that I feel he deserved what he got, extenuating circumstances not withstanding. Still, I think it important to note that the last three lines are set as questions, leaving the reader an opportunity to say, “Yes, but …”. I don’t know if Richard Wright would approve of my poem, but I hope that he would acknowledge that I understood what he was trying to say when he wrote Native Son.

If you liked this essay on poetry, consider reading these as well:

My Definition of Poetry
What Role Does Poetry Play in Society?

The Story of Bigger T

11. Bigger killed that young girl dead.
12. Laid her down on a hot coal bed.
13. Then took a brick to his girlfriend’s head.
14. Across the rooftops Bigger fled.
15. Nearly escaped but got caught instead.

21. Bigger the victim? What a switch!
22. That murdering, raping, son of a bitch!
23. Was no other man ever born in a ditch?
24. Or prevented by fate from relieving his itch?
25. Is poverty then to be blamed on the rich?

“I am an advocate for Liberty. What I do for Liberty I do not do for profit or fame. I seek no office other than the office of parliamentarian, and no reward other than for myself and my fellow men and women to live in a free country.” Louis William Rose is a lifelong student of parliamentary procedure and political process. He has served as parliamentarian for various organizations. A political philosopher, poet, singer, and writer, his articles have been published on-line and in pro-liberty papers in Florida, Kentucky, Georgia, and Montana. He holds a bachelor’s degree in Political Science from the University of North Florida, graduating summa cum laude in 2004, with an additional two years of graduate work in political philosophy. Mr. Rose is an outspoken supporter of the basic rights of man, especially freedom of speech, association, religion, individual rights to personal defense and property, and of republican, constitutional forms of government. He is married to the lovely Jamy Sue Rose, an award winning nature photographer and a Florida Master Naturalist and guide. He has two sons, Edward, a hydroponic farmer in the panhandle of Florida, and Alexander, a successful real estate developer.
View all posts by Louis William Rose →
This entry was posted in Essays, Poetry, Race and Gender and tagged analysis, Bigger Thomas, Harlem Renaissance, Louis William Rose, Native Son, Poem, Richard Wright. Bookmark the permalink.